Home » SOMETHING UNDER THE SHEETS: COBRA CLIMBS INTO BED WITH THAI WOMAN

A Thai woman got the shock of her life today when she found a one-meter-long cobra had joined her under the sheets.

Suthamat told rescuers that she was lying in bed, playing with her phone and minding her own business when she heard her dog barking rather strangely outside her house, according to Khaosod.

She, reportedly, paid it no mind until her furry companion sprinted into the bedroom and began furiously barking at her blanket.

When she looked to see what the dog was yapping at, she finally saw the cobra, which was slowly coiling in her blanket.

Suthamat raced out of the room to tell her parents — as one does — and immediately called the snake hotline.

It took rescuers 10 minutes to capture the poisonous snake and return it to its natural habitat, according to Bugaboo.

After the drama had subsided, rescue volunteers relayed a warning, via local media, regarding an increase in indoor snake sightings during “winter.” Many reptiles come inside seeking warmth as the weather cools, they explained.

It is a popular Thai superstition that those visited by a snake in their dreams have a secret admirer.

When it happens it real life, however, we doubt it has the same implications. 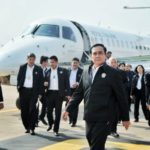