A six-year-old girl plunged to her death after her mother – a maid – left her to play in a 32nd-floor room in a Jomtien Condo while cleaning.

The child was found on the ground at the Jomtien Sai 2 condo as the maid searched frantically for her daughter.

She couldn’t remember where she had left her when she went to other floors to do the cleaning.

Pattaya station chief Pol Col Apichai Krobpetch said the mother of “Gift” (an assumed name) had said the child was sick so she took her with her to do the cleaning. CCTV showed that she had left the child in Room 3202 on the 32nd floor at about 3 pm. The child was found with multiple injuries at 4.30 pm. There was nobody else in the room.

It took many hours to identify the mother as the body of the child was taken to the local morgue for examination. Initial reports stated that the child’s condition was unclear and was found later in the evening.

No one had gone into the room since the maid left her there. A child’s finger marks were found on the glass fronted balcony indicating she had gone there and climbed up.

At this time,  no charges have been filed by the Pattaya Police. 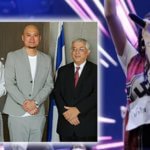 Over 10 snakes found on the bathroom roof of a restaurant.