A pop singer was left embarrassed after an unfortunate wardrobe malfunction on stage left her privates exposed to the crowd.

Jinny Jaa, 25, was performing at a festival in Prachinburi, Thailand when her dress started to ride up and reveal she was not wearing underwear.

The pop singer was left angered when the video went viral and claimed that she was indeed wearing underwear and said the lighting made it look like she was going commando.

Scroll down for video

‘There are lots of respectable figures next to the stage so if something was wrong they would definitely have said something,’ she said.

‘This was caused by the lighting and unfortunately, it has given people the wrong idea.’

Miss Jaa even took pictured of the pink frilly dress to show people that the garment has ‘inner pants’ sewn into them.

A reveller who attended the show said the wardrobe malfunction made the performance more entertaining.

‘I thought the singer would notice her private parts were visible. I was surprised that nobody told her,’ they said.

‘It went on for a few minutes, I was sure at the time of what I was seeing, and when people see the video they all agree.’ 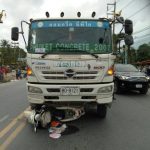 Motorcyclist crushed to death by cement truck in Thalang