Thirty-five prisoners deemed hard-core and a bad influence on other inmates have been transferred to maximum security at Rayong Central Prison following a riot at Si Sa Ket Prison on Sunday, Corrections Department deputy director-general Tawatchai Chaiwat said on Monday.

Mr Tawatchai, the department’s spokesman, said two groups of inmates began arguing about 4.40pm on Saturday. Warders broke up the dispute and issued a warning.

About 9.20am on Sunday, the two groups met again at the sports field in Zone 2. The argument rekindled and they began fighting each other.

All prison staff were mobilised to quell the brawl. About 50 police were brought in to assist them from Muang police station.

Fire engines from the Muang Si Sa Ket Municipality and ambulances from Si Sa Ket Hospital were also called to the prison and put on standby.

Prisoners not already involved in the rioting were segregated to prevent things escalating furrther.

By about 10am the situation had been brought under control. Two inmates were admitted to hospital for treatment of injuries incurred during the brawling.

Thirty-five hard-core prisoners were subsequently moved to maximum security at Rayong Central Prison to prevent a repetition of the clash.

They were all fully vaccinated and antigen tests for Covid-19 were negative, Mr Tawatchai said. 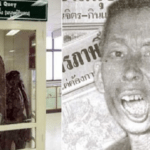 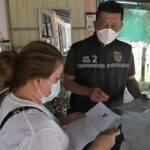