Shocked Chiang Mai Passenger : A bus passenger in Chiang Mai’s Chiang Dao district was shocked when he realised that he had been talking to a dead man for more than an hour in a bus shelter early on Thursday.

The unnamed passenger only discovered he was sitting beside a lifeless body when the morning broke.

Chiang Dao police were alerted at 6.10am about the body that was found in a sitting position inside the bus shelter in front of the Ban Mae Na graveyard in Tambon Mae Na.

The unidentified dead man, who appeared to be a hill tribe man 55 to 60 years old, had a small black power cable tied around his neck connected to the roof beam of the shelter.

Apart from the cable around his neck there were no other signs of injury.

He did not carry any identification document.

A doctor determined that he died about 10 hours before being discovered.

The bus passenger told police that he went to the bus shelter early in the morning when it was still dark.

He said the man was sitting in the shelter and he talked to him but as he did not reply he assumed the man was just sleeping.

When daylight broke, however, the witness said he looked at the man closer and was shocked to see the power cable around his neck.

He ran out of the shelter for help and people in the neighbourhood called police.

The body was sent to the district hospital for a post mortem examination. 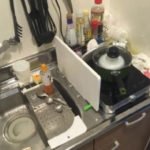 Chinese tourists apologise after being shamed for trashing Japanese Airbnb