No screaming fans waited with glowing signs to see politicians at the recent ASEAN summit in Bangkok – but they did scream for another unintended ambassador.

Paing Takhon, a 22-year-old Burmese model known for his long hair, sensual lips, and sultry photoshoots with cats, is in Thailand for his first fan meet – a rare case of fame in the country for a celebrity from Myanmar.

“It’s like he’s an ASEAN Economic Community ambassador. He’s like a bridge that connects Myanmar and Thailand,” Areewan Chukaew, 39, the founder of the Paing Takhon Thailand Fanclub, said Wednesday. “I like how down-to-earth he looks, especially in his sarong photoshoot. He’s also got a Korean look to him.”

Areewan and dozens of other fans gathered Monday to see Paing at Siam Paragon, where the model spoke on stage, sang a song, and made mini-hearts for his fans.

At the fanmeet, Paing could speak a few words of Thai (“I love you”) but spoke mostly in either Burmese through an interpreter or in English.

Thai entertainment executives, such as Wasan Homsaengpradit, the director of Hollywood Thailand studio, have said Paing will soon appear in commercial endorsements and soap operas, or lakorn, in Thailand.

“But first, he’ll have to learn Thai and practice his English,” Wasan said. “Maybe we’ll give him a Thai name. Maybe Khon.”

Fans call themselves “the Kalicos”, a reference to Paing’s photoshoots with animals – especially cats.

Paing was born Sis Ko Paing as the fourth in a family of six children, in Kawthaung town near the southernmost tip of Myanmar (close to Ranong province in Thailand). Paing has been active as a model since 2014. He made his film debut in 2017 in the Burmese film “Midnight Traveller” and in the same year released a music album “Chu Thit,” proceeds from which he donated to a charity for orphans in his home country.

“I’m Buddhist, so I believe that doing good will lead to good for me,” Paing said through an interpreter at Monday’s event.

Burmese fans residing in Thailand also made it to the meetup.

“I’ve been following his work since 2016. I’m so proud of him. I’m happy that Thailand is accepting our entertainers now too,” said Ei Phu Win, 31, a garment factory worker.

Paing also gave a private interview with Khaosod Myanmar, where he spoke about his love for his 9 cats, Thai food, and encouraged Thais to visit his country.

“As a Burmese, when guests come to our country, I feel very happy,” Paing said. “If my Thai fans want to visit Myanmar, there are a lot of sacred pagodas and many beautiful landscapes as well.” 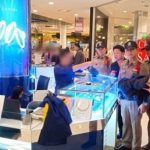