The 12th Irrigation Office on Tuesday warned seven Chao Phraya basin provinces to monitor for river overflow, as the Chao Phraya Dam in Chai Nat has had to speed up the release of water ahead of an incoming storm.

Surachart said the Meteorological Department had forecast that Thailand would experience heavy rains from this coming Thursday due to the combined influence of a depression in the middle of the South China Sea and a southwestly monsoon.

As a result, the Chao Phraya Dam in Chai Nat will have to speed up the release of water to downstream basins in order to accommodate the expected rainwater, he explained.

At present, the water level in the dam’s reservoir is 16.33 metres above median sea level, with water having recently been released at a rate of 351 cubic metres per second.

The director said the dam would have to release water until the level is 15.8 metres above median sea level.

The release rate was therefore increased on Tuesday to about 400 cubic metres per second, he added. 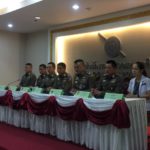