Known as the Muswell Hill Murderer, Nilsen killed at least 12 men by strangulation and drowning before dismembering them.
Serial killer Dennis Nilsen, who killed at least 12 men between 1978 and 1983, has died in prison.
The 72-year-old former civil servant from Aberdeenshire is believed to have died from natural causes.
He was convicted of the murders in 1983 and was imprisoned at HMP Full Sutton maximum security prison in Yorkshire.
Nilsen died in prison on Saturday, 34 years into his life sentence, according to the Ministry of Justice.
He was named the Muswell Hill Murderer because a number of his murders were committed at his home in Muswell Hill in north London.
He is known to have attempted to kill seven other men and boys. He initially confessed in 1983 to having killed 15 victims.
The majority of his victims were vulnerable boys or men, many of whom were homeless or homosexual.
After strangling them, he would bathe their lifeless remains and dress them up; placing them around his home and sleeping at their side.
When this grotesque illusion of intimacy drew to a close, he would stow the bodies under floorboards, eventually dismembering and burning them.
His crimes were only detected by chance – when a drain outside his home became blocked by the human remains he had tried to flush away.
A controversial Central TV documentary Murder in Mind featured extracts from an interview Nilsen gave in Albany Prison, Isle of Wight, in 1993.
He described how he liked to dress the bodies in pants and vests, then undress them, and enjoyed the feeling of power when he carried their “limp” bodies.
“The dangling elements of his limp limbs was an expression of his passivity. The more passive he could be, the more powerful I was.”
In the final section of the interview, he said: “The bodies all gone. Everything’s gone, there’s nothing left. But I still feel spiritual communion with these people.”
Nilsen was jailed for life with a recommendation he serve a minimum of 25 years, on six counts of murder and two of attempted murder. YSK – EP 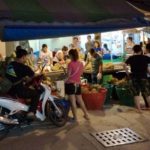