A salesman is pleading for information on the whereabouts of his missing Thai wife in Malaysia.

Nittaya Chamnangam, 26, left the house in Kuantan on Feb 27 and has not been seen or heard of since.
“My father called me to say that my wife had left the house,” Cheong Chun How, 24, said.
“I tried contacting her but could not get through to her.
Cheong who has a five-month-old son, Brandon, with Nittaya, said he was now having trouble getting Malaysian citizenship for their son.
“My son was born in Bangkok on Oct 28 last year and we returned to Malaysia once my wife recuperated.
“Now that she has disappeared, it makes it very difficult for me to get a Malaysian citizenship for him,” he said during the press conference.
He said he suspected that his wife had postnatal depression as she was always easily upset.
“We used to constantly argue after my son was born.
“But she did not show any signs that she was going to leave,” said Cheong, adding that he has since made a police report.
Department head Datuk Seri Michael Chong said his department received six similar cases this year alone.
“In those cases the wives left and took their children with them, leaving the husbands in a pitiful state.
“The chances of finding the wives or children in these cases are slim,” he said, urging men to consider all the possibilities before courting a foreign woman.
He urged anyone with information on Nittaya to call 03-2203 3888 or go to the nearest police station immediately. RS EP 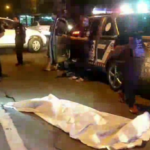 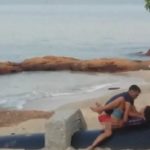 Russians caught on video having sex on beach blacklisted. Individual who posted the video to be arrested.