In a fiery and unwavering appearance Wednesday at an investment forum, Saudi Arabia’s crown prince called the killing of journalist Jamal Khashoggi “heinous” and “painful to all Saudis,” before warning anyone against trying to “manipulate” the crisis and drive a wedge between the kingdom and Turkey.

Crown Prince Mohammed bin Salman was joined onstage by two Arab allies as he made his first extensive public remarks about the killing that has sparked widespread condemnation and marred his international standing after Turkish reports said a member of his entourage was involved in the crime.

Many international business leaders pulled out of the Future Investment Initiative, the kingdom’s main economic forum, after the Oct. 2 killing of The Washington Post columnist inside the Saudi Consulate in Istanbul.

But in the forum’s vast and ornate auditorium, thousands of people who did attend rose to their feet to applaud the 33-year-old heir whose strong showing underscored his reputation for being bold and assertive.

Prince Mohammed, who spoke with Turkish President Recep Tayyip Erdogan by phone before the forum, addressed the case immediately after taking the stage for a panel discussion, saying the Saudis were cooperating with Turkey on the Khashoggi investigation.

“The situation that took place is very painful to all Saudis, especially because it was a Saudi citizen. And I suspect it is painful to anyone in the whole world,” Prince Mohammed said.

“It is a heinous act that is unjustifiable,” he added, before cautioning anyone who might try “to manipulate the situation” and sow division between Riyadh and Ankara.

“I have a message for them: They will not be able to do that as long as there is a king called Salman bin Abdul-Aziz and a crown prince called Mohammed bin Salman in Saudi, and a president in Turkey called Erdogan,” he said to applause.

Erdogan on Tuesday delivered a sharp rebuttal of Saudi Arabia’s widely criticized account that the dissident writer died accidentally in a brawl, saying Saudi officials had planned the killing for days.

He kept up the pressure Wednesday, saying in Ankara: “We are determined not to allow the murder to be covered up and for those responsible — from the person who gave the order to those who executed it — not to escape justice.”

Erdogan has said that 15 Saudi officials arrived in Istanbul shortly before Khashoggi’s death and that a man, apparently dressed in the writer’s clothes, acted as a possible decoy by walking out of the consulate on the day of the disappearance.

Turkish officials say the 15 men comprised a Saudi hit squad that included a member of Prince Mohammed’s entourage on overseas trips. Saudi Arabia has suggested, without offering evidence, that the team went rogue. It has arrested 18 Saudis and fired five top officials, some of whom worked directly under the crown prince.

Turkish media have published a security camera image showing a vehicle belonging to the Saudi Consulate purportedly scouting a forest in the outskirts of Istanbul before the killing.

The killing of the 59-year-old Khashoggi has created an international firestorm as suspicion mounts that the crown prince had a hand in the killing.

“Well, the prince is running things over there more so at this stage. He’s running things and so if anybody were going to be, it would be him,” President Donald Trump was quoted telling the Wall Street Journal on Tuesday.

Khashoggi, who lived in self-imposed exile in the U.S. for nearly a year before his death, had written critically of the young prince’s crackdown on dissent. Dozens of Saudi activists, writers, clerics and even women who were behind calls for the right to drive have been detained.

King Salman and Prince Mohammed met Tuesday with Khashoggi’s son, Salah, and his brother, Sahel, at the Yamama Palace, where the royals expressed their condolences, according to state-run Saudi news, which distributed photos of the event. A friend of the Khashoggi family told The Associated Press that Salah has been under a travel ban since last year. The individual spoke on condition of anonymity, fearing reprisal.

The crisis overshadowed the crown prince’s high-profile economic forum, aimed at raising much needed investments to underwrite his plans to overhaul the Saudi economy.

After the killing, many international business leaders and Western officials pulled out of the forum, including the CEOs of JPMorgan Chase, Uber, Siemens and Blackrock. Western media outlets withdrew as partners for the event.

Instead, the forum spotlighted how the kingdom’s regional allies have rushed to rally behind the crown prince.

On stage with him was Bahrain’s Crown Prince Salman bin Hamad Al Khalifa and Lebanon’s Prime Minister Saad Hariri, who abruptly resigned his post last year during a strange visit to Saudi Arabia in which many people suspected that he was held against his will. Hariri returned to Lebanon and to his post later that year after French mediation and has visited Saudi Arabia and met with the crown prince since then.

The crown prince even joked about the incident at the forum, saying Hariri would be in Saudi Arabia this time for two days.

“So please, no one say that he is kidnapped,” Prince Mohammed said, before turning to Hariri and pumping his hand as the crowd erupted in laughter.

The summit also drew Dubai’s ruler, Jordan’s king and Pakistan’s prime minister. Pakistan, which is grappling with a soaring deficit, struck a deal on the sidelines of the forum with Saudi Arabia for $6 billion in aid from the oil-rich kingdom.

Some $55 billion in agreements were signed at the forum, much of that focused on the lucrative Saudi energy industry. Saudi Arabia is one of the world’s largest exporters of oil, has the Arab world’s largest economy and is a key emerging market.

Rather than cancel their participation altogether, some companies sent midlevel executives. Outside the hall, hushed conversations over coffee and dates took place, with a flurry of business cards exchanged.

Several participants from the U.S., including a California hedge fund manager and staff from a U.S. desalination company, declined to speak to the AP, reflecting a general nervousness among the Americans.

“This experience has given everyone pause … to stop, get our breath, take stock and then figure out the most appropriate way forward,” David Hamod, president and CEO of the National U.S.-Arab Chamber of Commerce, told the AP.

“But timing is everything. A fair number of U.S. companies didn’t make the trip, as you know, and that’s an issue of timing,” he said, adding that he believes the relationship will be “very positive” in the long term. 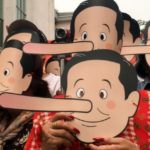