Saigon pensioner has the world’s greatest tattoo at the age of 72 of his home address and daughter’s phone number so he can wander around without losing his way home.

The touching story was shared by Bui Van Quan, a tattoo artist in District 2, who said he had never met such a peculiar customer in his career.

“He likes to wander around a lot, but would often forget his way home due to an age-related memory loss,” Quan said.

“His daughter had tried different ways to have him wear a tag with contact details on it, but they didn’t work.”

The 21-year-old tattoo artist recalled being reluctant at first, as he didn’t know whether the elderly man would be able to put up with the pain of getting a tattoo.

“But when I arrived at their house for the procedure, he seemed happy about the decision. He told me stories about his youth, which was remarkable considering his memory problem,” Quan recalled.

.
According to the artist, the old man’s daughter had been rejected by many tattoo shops before she finally found one that agreed to perform the task.

The session only lasted for two hours, but it taught Quan many lessons about familial love and filial piety, he said.

Quan has been working as a professional tattoo artist for three years since graduating from high school, and his motto is to put all of his passion into his work and the best outcome will ensue.

“I don’t think a person should be judged through their tattoo. I’m not saying we should all get a tattoo, but let’s not see it as anything more than an accessory,” Quan said. 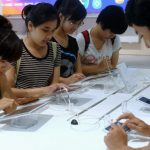