Safaa Boular, the youngest woman convicted of plotting a terror attack on British soil, has been jailed for life with a minimum of 13 years.

The 18-year-old was sitting her GCSEs when she was seduced by IS fighter Naweed Hussain, originally from Coventry and more than 15 years her senior.

She hid her Islamic State-inspired plans in coded conversations about preparations for an innocent Mad Hatter’s tea party.

Judge Mark Dennis QC sentenced Boular to life imprisonment with a minimum of 13 years at the Old Bailey on Friday – making her the last member of Britain’s first all-women terror cell to be jailed.

She had been trying to reach Syria to marry Hussain in an online ceremony, but her attempt was foiled by police. He was later killed in a drone strike.

Boular turned to plotting a suicide bomb and gun attack on the British Museum with her older sister and mother instead of going through with a terror attack in Syria.

She played a “leading role” in the “advanced plan”, according to the judge.

Judge Dennis rejected claims Boular had entirely renounced her Islamist views and downplayed the extent grooming played in her radicalisation.

“In my view there’s insufficient evidence to say at this stage this defendant is a truly transformed individual. Her views were deeply entrenched,” he told the Old Bailey.

“However much she may have been influenced and drawn into extremism, it appeared she knew what she was doing and acted with open eyes.”

Boular did not react when she was found guilty of two counts of preparing terrorist acts and sentenced to life imprisonment.

Her sister Rizlaine, 22, and her mother Mina Dich pleaded guilty at an earlier hearing to taking over the plot and planning their own attack, after Safaa was arrested by police in April last year.

Their plans were uncovered by online M15 role-players and the Boular family home in Vauxhall, south London, was bugged.

Boular handed the baton to her older sister when she was in custody for trying to travel to the war zone.

In coded telephone calls, they discussed a traditional English tea party with an Alice In Wonderland theme

Her older sister planned a knife attack at the Palace of Westminster with the aid of their mother. She was jailed for life with a minimum of 16 years.

Their mother, Dich, 44, was imprisoned for six years and nine months.

Defending Boular, Joel Bennathan QC said she had been “groomed” into radicalism when she was 15 but has now shunned Islamist extremism and no longer follows the Muslim faith. 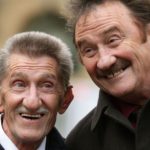