Ruk Siam News reported on Facebook that a Russian couple had been robbed at knifepoint by two men in a black pick-up with no plates.

The Russians told Pol Maj Saijai Khamjunla that they had been walking back to the Laguna Beach hotel in Thepprasit Soi 17 when they were confronted by two men.

The husband resisted but armed with a knife they grabbed a shoulder bag and attempted to drive off.

The Russian managed to grab hold of a wing mirror that was damaged as the assailants escaped into the night after the attack at 12.30 am on Wednesday.

The bag contained only a phone and a few documents.

A patrol was sent to the area and CCTV is being studied to get a lead in the case. 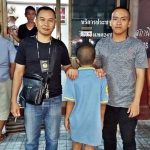 Boys held for burglary in Sattahip