A Russian motorist hits and kills a pedestrian making a video call on his phone opposite The Now Hotel on Jomtien Beach road this morning.

The victim is also thought to be Russian but has not yet been identified.

An opened can of beer and a bottle of spirits was found in the Russian motorist’s car.

Siamchon News included a video of the aftermath of the accident saying that the Russian driver made no attempt to flee. He had even gone up to the corpse and cried.

Police were called at 3am following the accident. Foundation medics from Sawang Boriboon Pattaya found the lifeless body of a 25-30 year old man under the wheel of a tour bus belonging to Kaset Bundit University.

The bus was stationary. The victim had been hit by a white Chevrolet Cruze driven by 35 year old Nikolajs Latvigas.

In the video he is heard to say in Thai that he did not see the pedestrian. A Thai person confirms, “You didn’t see him walking?” to
which he agrees he had not.

An eye witness called Ratasaet Saewee, 29, who was with friends nearby said that he had seen the subsequent victim walking along making a video call on his phone but thought nothing of it. He was then hit by the Chrevrolet and ended up being thrown under the wheel of the tour bus that was parked.

An open can of beer was seen on the video in the car and police also said there was a bottle of spirits. The driver was given an alcohol breath test but no result was reported.

Siamchon News said that following the accident the Russian driver made no attempt to flee. Instead he parked and went up to the corpse, bent down and began to cry.

Police are trying to locate the relatives of the victim who had no ID with him. They believe he could be a Russian national from his
appearance. 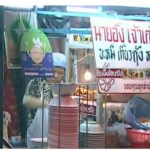 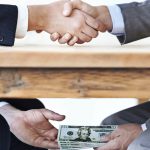