Russian Tourist Injured: A Russian woman was injured when a songtaew bus braked suddenly early Wednesday morning, then left her and a friend stranded after the accident in Jomtien near the View Talay 5 condo complex.

The emergency centre of the Sawang Boriboon Thammasathan Pattaya was called at 3.30am to provide assistance to a Russian woman with a head wound at the Thrappaya Intersection in Tambon Nong Plue in Chon Buri’s Bang Lamung district.

The tourist was identified as Vera Ivanova, 26. She received first aid from rescuers and was sent to a nearby hospital.

Sakda Kulmart, 19, who works at a nearby Family Mart store, called the emergency centre after the tourist sought help. Sakda said the tourist told him that a songtaew (two-row) pick-up bus suddenly stopped resulting in the passenger hitting her head hard on the iron bar. The driver then told her to get down and sped off.

Police are investigating CCTV in the area in an attempt to locate the driver and get his side of the story. 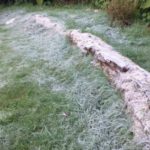 Doi Inthanon blanketed with frost as mercury drops to -1C