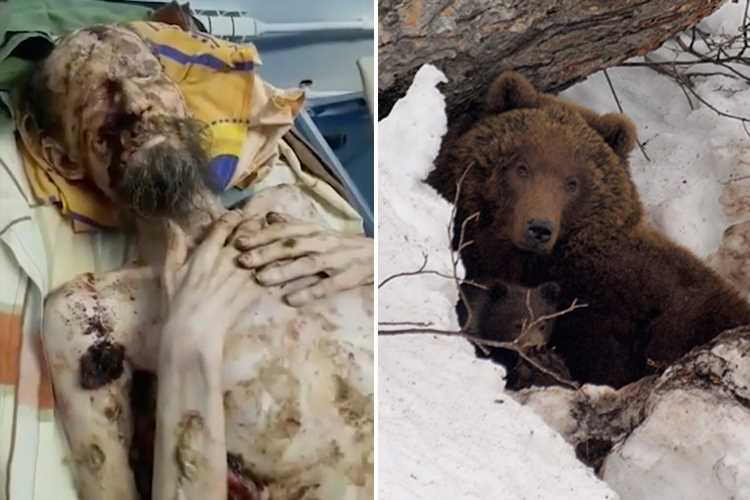 A Russian man looking like a living corpse has been rescued from a bear den after he claims the animal broke his back and left him there for a month.

The man, who identified himself only as Alexander, was discovered by hunting dogs in Russia’s remote Tuva region, close to the border with Mongolia, local media says.

Initially, the hunters thought the body had been mummified by the dry air but were stunned to discover that the man was still alive.

Shocking video (scroll down) shows how Alexander’s face and body were encrusted with dried blood and dirt, his was skin a deathly white colour, and his dull eyes were barely able to open.

At one point medics speaking Russian – rather than the local Tuvan language – ask the man his name, prompting him to open his eyes and reply ‘Alexander’.

Medics say he can move his arms, barely open his eyes, and speak – but is otherwise immobile and exhausted.

It is not clear exactly when Alexander was found, but he has told doctors the attack happened roughly a month ago.

Brown bears have been known to partially or completely bury animals they kill or carrion they find, sometimes waiting for days or weeks before returning to it.

Ivan V. Seryodkin, of the Russian Academy of Sciences, has theorized that they do this to keep prey hidden from other scavengers while the meat decomposes and becomes ‘ripe’, making it easier for them to eat.

Alexander said that his drank his own urine to stay alive while fearing that the bear could come back at any moment to finish him off.

Doctors said it was a ‘miracle’ that he wasn’t killed, and admit that they aren’t sure how he was able to survive for so long.

He was only discovered after a group of hunters passed the cave and their dogs ran inside before refusing to move on.

The hunters checked inside the lair and saw what they believed was a human mummy – until they released Alexander was alive.

Local reports said that the man remembers his first name but not his surname or age.

A hospital video shows the bearded man opening his blue eyes and confirming his first name.

He was described as having ‘severe injuries and rotting tissue’ from lying motionless for so long in the den.

‘Local medics say they cannot explain how the man survived such injuries,’ said the report.

How brown bears hide their prey
The brown bear is one of the world’s most common bear species and is found across a wide range, stretching from central and eastern Europe right across Russia and into Alaska, Canada, and parts of North America.

The bears will hunt and eat almost anything that carries a scent, feeding on leaves, fruit, roots, fish and other land animals which they hunt themselves or find as carrion.

Bears have been known to bury their prey for later consumption, which researcher theorize is to hide it from other predators and to allow it to decompose, making it easier to eat.

Brown bear dens are used primarily for hibernation, with the animals either building one by digging out vast quantities of earth or else making use of natural caves.

For a time they were not considered true hibernators since their body temperature only drops slightly during the winter periods.

It is thought this is so they can react quickly to threats, unlike other species such as chipmunks which require time to warm up before they can move properly 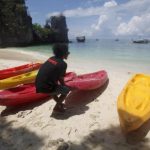