A spokesman for the Royal Thai police warned tourists and foreign business people about the dangers of Thailand following a 3.6 million baht theft apparently by a taxi driver from a drunk Chinese man.

The warning comes in stark contrast to written comments made earlier in the week by the tourism minister claiming that Thailand was “a completely safe environment”.

Pol Col Krissana Patanacharoen was commenting on social media reports about the theft from Zhong Ai that took place on September 1st but has only just come to light in the media.

INN reported that the tourist had been drinking with friends at RCA and when he was drunk got in a taxi in the early hours of the morning asking to be taken to a condo in Ekkamai Soi 30.

Klong Tan police said the tourist did not remember the number of the cab.

He fell asleep and recovered his senses to find himself lying next to the C Ekkamai condominium in Ekkamai Soi 12.

Valuables worth 3,621,000 were missing and he went to Klong Tan police.

It was not reported exactly what was missing.

Witnesses at all the places as well as CCTV cameras have been checked to try and get a lead on the taxi and driver who appears to be responsible.

Pol Col Krissana said that crimes such as this had happened many times before. He warned people about being careful when going out drinking at clubs and asked for the help of taxi drivers in being good hosts.

INN quoted him as saying that tourists and business people who come to Thailand should be careful and be vigilant of criminal elements who might commit crime such as this.

New Minister for Tourism and Sports Phiphat Ratachakitprakarn who attended a world class snooker tournament in Lat Prao that started on Monday said in his program notes:

“We have relied heavily on sports to convey to the international tourists that Thailand has always been one of the leading tourist destinations in the world with a beautiful heritage, friendly people and a completely safe environment”. 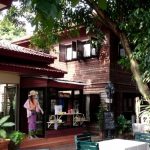