In the first set of experiments, 13 dogs of different breeds, including a toy poodle, a jack russell terrier and a shiba inu, were introduced to Aibo with their owners present. Mr Imaizumi observed that nine of the 13 dogs approached Aibo curiously and sniffed at it.

Of the nine that approached Aibo, six dogs attempted to sniff Aibo’s rear end, indicating an interest in learning more about the robot dog. The dogs showed a greater interest when their owners also interacted with Aibo.

However, Mr Imaizumi said that the four dogs that did not approach Aibo remained wary even when their owners interacted with Aibo.

In the second set of experiments, owners from three households took Aibo back home with them for two weeks and recorded videos of their dogs interacting with their new robot companions.

Over time, some of the dogs that initially showed fear or disinterest in Aibo got used to their presence and would even imitate them.

A six-month-old toy poodle from the first household was wary on the first day, but began to play with Aibo after the third day.

A three-year-old jack russell terrier from the second household showed excitement immediately after he was introduced to Aibo and would copy Aibo’s movements.

He would even bring Aibo a toy when he wanted to play, and would show his affection by licking Aibo’s face.

Mr Imaizumi noted that some of the dogs initially showed signs of jealousy towards Aibo, suggesting that they felt their position in the household hierarchy had been threatened by Aibo’s arrival.

“There is a good possibility that living together with Aibo can improve mental stability and relieve stress in dogs,” he said in the statement.

“Although it isn’t good to leave dogs alone at home, having Aibo around might let dogs feel like they always have a play partner around, and that could potentially give them some peace of mind.”

He added that the experiments also showed that something close to consideration or compassion can be nurtured in dogs through their interactions with Aibo. 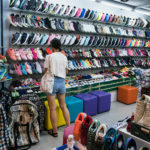 Bt4m worth of fake brand-name goods seized in Chon Buri