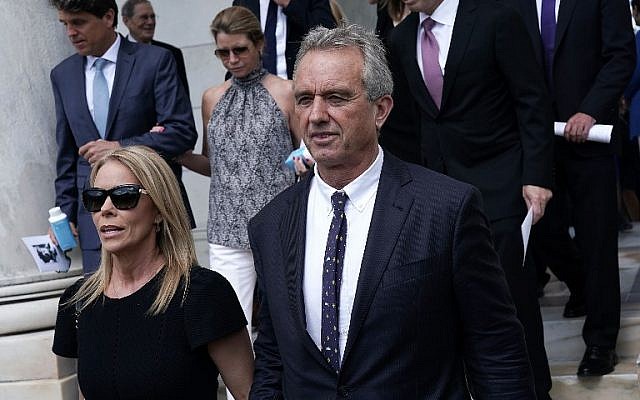 Sirhan Sirhan is serving a life sentence in a California prison for the murder 50 years ago of Democratic presidential hopeful Robert F. Kennedy.

Kennedy’s son and namesake, Robert F. Kennedy Jr, is not convinced the Palestinian-born did it, or at least not alone.

RFK Jr wants a fresh investigation of the assassination — an appeal which is supported by only one of his eight surviving siblings.

Robert F. Kennedy, 42, was shot dead just after midnight on June 5, 1968 in the kitchen pantry of the Ambassador Hotel in Los Angeles.

The younger brother of president John F. Kennedy, cut down by an assassin’s bullets five years earlier, had just delivered a victory speech in the hotel ballroom after winning the California presidential primary.

The former US attorney general and New York senator died the next day.

Sirhan, who was born in Jerusalem and moved with his family to the United States in 1956, was convicted of firing the fatal shots with a .22 caliber pistol.

Sirhan, who was 24 at the time, confessed to the murder at his 1969 trial but claimed he could not remember carrying it out.

Diaries in which he had written “RFK Must Die” were entered as evidence along with a motive of supposed hatred for Kennedy’s support for Israel.

Sirhan was captured at the scene, the gun still in his hand, but there have long been claims a second gunman may have been involved.

Several witnesses and an acoustics expert believe that a total of 13 shots were fired although Sirhan’s gun only held eight bullets.

Also, Kennedy was hit behind the right ear by a bullet fired from point-blank range although Sirhan was said to be standing in front of him.

RFK Jr, 64, an environmental lawyer who is the third-eldest of Robert and Ethel Kennedy’s 11 children, is among those who entertain doubts.

He revealed to The Washington Post last week that he visited Sirhan in prison in December of last year.

“I went there because I was curious and disturbed by what I had seen in the evidence,” RFK Jr told the Post.

“I was disturbed that the wrong person might have been convicted of killing my father,” he said. “My father was the chief law enforcement officer in this country.

“I think it would have disturbed him if somebody was put in jail for a crime they didn’t commit.”

His sister, Kathleen Kennedy Townsend, 66, the former lieutenant governor of Maryland, said she supports her brother’s call for a fresh look at the assassination.

“Bobby makes a compelling case,” she told the Post. “I think it should be reopened.”

Paul Schrade, a labor organizer who was wounded at the Ambassador Hotel that night along with four other people, has long campaigned for the case to be reopened.

“Yes, (Sirhan) did shoot me,” Schrade, now 93, told the Post. “Yes, he shot four other people and aimed at Kennedy.

“The important thing is he did not shoot Robert Kennedy,” Schrade said. “Why didn’t they go after the second gunman?

“They knew about him right away. They didn’t want to know who it was,” he said. “They wanted a quickie.”

Two other surviving Kennedy children — his eldest son, Joseph P. Kennedy II and Kerry Kennedy — told The Boston Globe they did not support reopening the case.

“I think what is most important is that our country and my family reflect on what my father stood for and fought for — a legacy promoting global peace, social justice, and civil rights,” Joseph Kennedy said.

Kerry Kennedy, a human rights activist, said “the reason that people are interested in the circumstances of my father’s death is because of what he did with his life.

“And I think we should focus on his life and not so much on his death.”

There appears, in any case, to be little likelihood the investigation will ever be reopened.

In a 2013 rejection of Sirhan’s appeals, US magistrate Judge Andrew Wistrich dismissed the claims there were 13 shots instead of eight as not conclusive.

The judge also said the fatal shot behind the ear could be explained by the “chaos” and Kennedy perhaps turning his head after Sirhan opened fire.

Sirhan, now 74, was sentenced to death in 1969 but his sentence was commuted to life in prison in 1972 after the death penalty was abolished.

His requests for parole have been repeatedly denied.