Home » Road rage biker drove an ignition key into the victim’s head. Doesn’t understand what all the fuss is about

Police in Nonthaburi on Monday confirmed that charges have been filed against a local hospital porter for causing grievous bodily harm following last Tuesday’s violent attack. The injured man ran from the scene after screaming ‘I can’t get it out’ to the attacker who insisted on getting his key back. It is another reminder of Thailand’s chronic problem with road rage.

A Thai motorcyclist last Tuesday got off his bike in a fit of rage and slammed his motorbike ignition key into the head of another motorbike driver in front of him after becoming enraged following a near-miss crash when the bike in front of him stopped suddenly. The victim of the road rage attack was so stunned by the assault that he didn’t realise what had happened until his attacker returned and demanded his motorbike key back.

This prompted the man to get off his bike and approach the leading motorbike. He lashed out and whacked the other driver on the head. He then went back to his bike but found his key was missing. It was stuck in the head of the man in front of him.

Not finished with the dazed and disorientated victim yet, he wanted his key back out of his head
It appears that even after the vicious assault the attacker was not yet finished with his victim. As the 18-year old sat on his motorbike in a dazed, shocked state he was approached again by the man who hit him demanding that he hand him back his motorbike key. ‘Give me back my key,’ Thay, the attacker said. The injured man replied that he did not know where his key was. ‘It’s in your head, mush,’ was the startling reply.

‘I can’t get it out, it hurts’
Reports of the incident were confirmed yesterday by the Royal Thai police in Nonthaburi. The incident occurred in the Talkat Khwan area in the centre of Nonthaburi City on July 16th at 20 past noon. The injured party in the attack has not been formally identified except by the nickname Bank. He is 18 years of age. It is reported that after being assaulted by the road rage attacker, the victim reached up to his head and could then feel the bike key protruding from it. ‘I can’t get it out,’ he screamed. ‘It hurts (man jep).’

Police in Nonthaburi  confirm that legal action for causing grievous bodily harm has commenced
Thai police yesterday confirmed that charges of causing grievous bodily harm have been filed against a man who works as a hospital porter in connection with the incident. Lieutenant General Chaiyong Nummohong of Nonthaburi Police Station is the officer handling the investigation and he confirmed the case (1103/2562) against the accused who has also been informally identified as a man named Thay.

Injured man ran to a local hospital
Following come confusion after the traumatic experience, the injured man ran from the scene before concerned passersby arrived to investigate what was happening. It was later confirmed that he was attending Phra Nang Klao Hospital in Chang Wat Nonthaburi where doctors immediately treated him. Since then, Xray photos of the key inserted into the injured man’s head have been published. Pictures of the key stuck in the man’s head are available online but they are too shocking to publish.

18-year-old man will make a full recovery
The hospital later operated on the man and removed the key from his head successfully. He is expected to fully recover from the attack. The injured 18-year old has explained from his hospital bed that he was so stunned by the initial attack, he did not realise the key was in his head. He had initially greeted the other motorcycle rider respectfully as he approached him and was overwhelmed by the strength of the attack.

‘Why has this caused so much trouble?’ – attacker pleads not to be sent to jail
Thay, the attacker has since issued an apology for his actions and offered ฿3,000 to ฿4,000 in compensation to the victim.  He explains that he was drunk when he lost his temper and does not understand what the fuss is all about. He has pleaded not to be sent to prison for losing his cool. ‘We’re not rich, don’t send me to prison,’ he said. ‘Why has this caused so much trouble?’

Road rage is a big issue in Thailand
Thailand’s roads are already the most dangerous in the world. Well resourced and often very modern, the problems that make the country’s roads so dangerous are firstly motorbikes and secondly, Thai drivers and their antics. Road rage is one symptom of this. Many foreigners are advised to not only be assiduously careful driving in Thailand but also to be certain to only use the car including the horn, in the most careful and polite fashion. Road rage and physical violence on the roads is a serious issue.

Two men in Phuket attacked an ambulance with an axe and threatened it with a gun in May
In May, two men in Phuket were arrested by Thai police for attacking an ambulance that had put them out while driving on the motorway. The pair, riding a motorbike, produced an axe while driving and attacked the ambulance while in motion. They damaged the rear window of the emergency vehicle and the mirrors. One man at the rear of the bike also pointed a firearm at the driver of the ambulance.

The men were later charged with threatening behaviour after arrests warrants were issued by the Phuket Provincial Court when an ambulance worker reported the incident to authorities.

Police arrested the men after a raid on a house and concluded they were high on drugs
The two men were detained on May 23rd at a rented house in the city. Police searched the house and found ammunition for a gun but the firearm was missing. The Deputy Commander of the Provincial Police in Phuket, Colonel Sermpan Sirikong, at the time, revealed that the police believed that the pair were high on drugs.

One year since policeman died in road rage shooting in Chumphon in Southern Thailand
The road rage incident in Nonthaburi this week comes exactly a year after a fatal road rage incident occurred in  Thailand’s southern province of Chumphon on Sunday 16th July 2018 when a police officer was shot dead by a man driving a pickup angered that a car carrying the officer had cut across his path on the road.

Police Corporal Phayungsak Maidee died on his way to hospital from gunshot wounds to the chest. He had been attacked with a shotgun. The policeman had been a passenger in his friend’s car travelling from Nakhon Si Thammarat to Chumphon.

Policeman was shot by the attacker after he tried to intervene to protect his friend
Later, when the car passed an intersection on the road the pickup truck overtook them and stopped. The pickup driver got out and approached the car and after the window was lowered, began punching the driver. The driver of the car was dazed by the attack and lost consciousness. He said he heard a gunshot and when he awoke the policeman was lying on the ground outside the car fatally injured. It appeased that his friend has exited the car to come to his assistance and was shot by the attacker.

Roads that turn into battlefields
News reports of road rage incidents involving weapons and injuries are quite common in Thailand. The problem with road rage in the country is linked to the ready availability of weapons including firearms but is primarily driven by the peculiar psyche of Thai men living in what is a very animistic and virile society. This can turn the roads of Thailand into a battlefield often producing bloody outcomes. 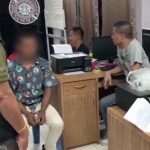 Thai man charged with attempted murder after tourist is stabbed 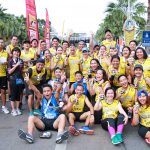