The Bangkok Metropolitan Administration (BMA) has ordered the expansion of road lanes and the arrangement of a detour to alleviate traffic congestion due to the construction of the MRT Orange Line project.

BMA executive officials inspected a subway station beneath Lam Sali intersection in Hua Mark area of Bang Kapi district this week. The project is currently under construction, prompting many people to file complaints with the BMA.

Beneath the two-lane road, outside Bang Kapi market, another subway station is currently under construction. Four kilometers of road is temporarily closed due to the construction of several subway stations, causing heavy congestion.

The construction of this stretch of the Orange Line project is expected to be completed by the end of 2022. Road traffic at Lam Sali intersection will return to normal in April 2020 and other parts of the road will return to normal by the end of 2021. In the meantime, a detour will be found shortly to alleviate traffic congestion. The contractor will remove some road barriers, where the construction is complete, and expand the road lanes. So far, the Orange Line project is 39% complete.

Additionally, the BMA plans to provide a boat service as an alternative for commuters. The boat ride will be provided free of charge for the first three years. Up to 800 commuters are expected to use it daily. 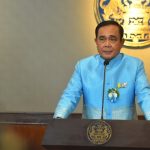 ‘Dreadlock Drug Mule’ to be released from Thai prison