GoldenGlobes Host Ricky Gervais: Hollywood in No Position to Lecture About Anything. You Know Nothing About the Real World.

“You know nothing about the real world. Most of you spent less time in school than Greta Thunberg,” Gervais told the A-list crowd at the top of the show.

Gervais saved his most stinging barb for Apple, which entered the entertainment business last year with the debut of Apple TV+. Apple CEO Tim Cook was in attendance during Sunday’s ceremony.

“A superb drama about the importance of dignity and doing the right thing made by a company the at runs sweatshops in China,” the actor-comedian said.

“If ISIS started a streaming service, you all would be calling your agents.

Ricky Gervais also made a joke about Jeffrey Epstein and his alleged close ties to Hollywood power brokers.

The joke started with a reference to Gervais’ Netflix series After Life, in which he plays a depressed man who avoids committing suicide..

“So, in the end, he obviously didn’t kill himself. Just like Jeffrey Epstein. Shut up, I know he’s your friend but I don’t care,” Gervais said. 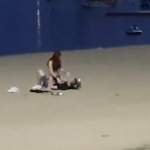