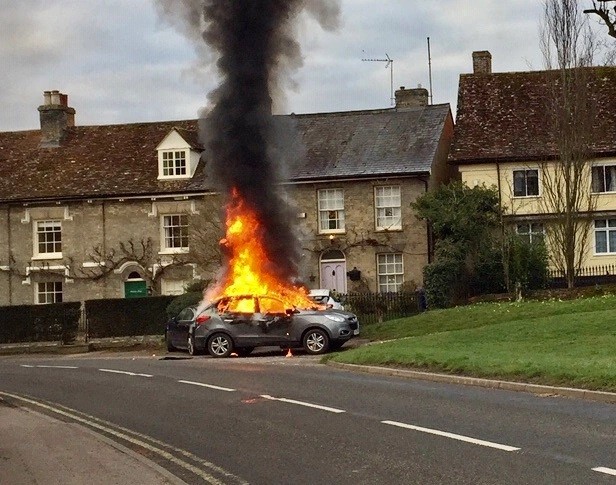 A RETIRED police chief who had repeatedly complained about the noise made by church bells has died in a fireball outside his £1million house in a Suffolk village.

The charred body of Edwin Williams, who was in his 70s, was found in the driver’s seat of his car this morning.

Mr Williams said to have been involved in a series of disputes with neighbours and other villagers in Cavendish near Sudbury – with church bells being his main problem.

The man, a former Detective Superintendent in the Metropolitan Police, had repeatedly complained about the noise of the bells at 14th century St Mary the Virgin’s Church in Cavendish, Suffolk.

Villagers said they heard a huge explosion at around 7.30am this morning and saw Mr Williams’ grey Hyundai IX35 estate car on fire with flames shooting up to 30ft in the air.

The blaze sent a pall of black smoke rising above the village green and the heat was so intense that nobody could get near, neighbours said.

Firefighters were on the scene within minutes and doused the flames before discovering the body of Mr Williams in the driver’s seat.

It is thought that he started the fire after driving his car to the front of a next door neighbour’s house and parking it beside their two cars which were badly damaged in the fire.

Police closed the road for several hours until the charred remains of Mr Williams’ car were taken away.

Officers are not thought to be treating the death of Mr Williams as suspicious and believe that nobody else was involved.

The retired police chief and his wife Jean had moved into their property in 2004, but he had been living there alone after they split up several years ago.

A villager said: “He was always falling out with people and was not a very popular man.

“He had various legal disputes with different neighbours over the years. He would complain about things like problems with drains and guttering causing damp in his house.

“I think in the past, he had some sort of restraining order put on him to stop him harassing one neighbour.

“But his biggest issue was with the church bells. Most people in the village love the sound of the bells, but he would repeatedly moan about them.

“He tried to get a petition started about the bells and would go and hammer on the doors of the church warden and the vicar to complain about them.

“He normally parks on his own driveway at the side of his house behind a set of gates, but it seems he started the fire after parking deliberately beside his neighbour’s cars.

“His neighbours are lovely people and did not deserve this aggravation.”

Most people in the village love the sound of the bells, but he would repeatedly moan about themA Villager

Another neighbour said: “I heard the most enormous bang first thing in the morning and looked out to see this car on fire with flames shooting in the air.

“There was absolutely nothing that anyone could do. Nobody could get near and people only realised that there was a body in the car when the firefighters arrived and dealt with the fire.

“He must have had something in the car to cause such a fierce fire and a big explosion.”

Mr Williams wrote an open letter in October 2017, saying he had been “reduced to a frazzle” by the noise of the church bells ringing for three hours to commemorate a soldier who died in World War One.

He wrote: “Living near the church, I do not expect freedom from bells ringing. However, when a three-hour session blights my comfort and amenity, I intend to complain loudly and in the strongest possible terms.

“I personally lost eight uncles during the Second World War, and doubt very much that I would be allowed a three-hour bell ringing session to celebrate their sacrifice.

“In my opinion, this is just an excuse for additional bell ringing practice and amounts to selfish and inconsiderate conduct.”

Other villagers dismissed his complaints at the time, saying they enjoyed listening to the bells and had no problem with them.

A Suffolk Police spokesperson said: “Police can confirm that a man has died following a car fire in Cavendish.

“Suffolk Fire and Rescue Service and Police were called at just after 7.30am today to reports of a vehicle alight on The Green in the village.

“The driver of the grey Hyundai IX35 estate car, a man in his 70s, sadly died at the scene. The man’s next of kin have been notified

“Two other cars, parked nearby, were damaged as a result of the fire.”

Police have appealed for information from any witnesses, or anyone driving in the area at around 7.30am who had a dashcam in their vehicle. 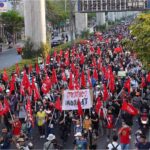 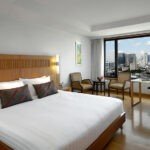