An ancient pagoda under restoration in Wat Kud Wa of Kalasin’s Kuchinarai district collapsed on Monday morning, killing one worker and wounding four others.

Police responded to the 10am report of the pagoda’s collapse within the temple compound in Tambon Kud Wa. The four workers with broken limbs were rushed to hospital.

The deceased worker Wan Prakhieo, 56, remained under the debris as of press time, as rescue workers wore worried removing the body would cause a further collapse of the building. They were awaiting a green light to retrieve the body following a detailed inspection by officials.

The initial police probe found that Wan and fellow workers were working on the pagoda’s pavilion during the morning downpour. As they built up earthen blocks to cover the original wall of the pagoda, the building collapsed on them, resulting in the death of Wan and injuries to the other.

Kalasin governor Kraisorn Jaichalard has instructed officials to probe what happened and provide aid to the affected.
The Nation 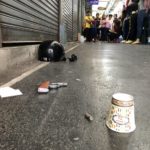