In a Facebook post on Thursday, Phadet Siridamrong, director of Nern Plub Wan Animal Hospital in Chonburi province, said the baby elephant developed diarrhoea on Wednesday and could not hold down her milk.

“By Wednesday evening, she could not get up while her body temperature continued dropping,” he said. “The vets gave her intravenous fluid, antibiotics, probiotics, oxygen and a heated blanket, but she did not improve and died on Thursday night.

“The team looking after Fah Sai over the past month were sad to see her go. We hope she rests in peace,” he said.

The baby elephant was found on November 28 with severe injuries from gunshots and a snare in Chanthaburi’s Kaeng Hang Maew district.

Her rescuers named her Fah Sai (clear skies) before transporting her to Nong Nooch Tropical Garden in Pattaya on December 1 for treatment as well as to be nursed by a mother elephant. On December 11, veterinarians had removed 14 bullets from her legs, and she made a quick recovery and was getting ready to wear a prosthetic leg. 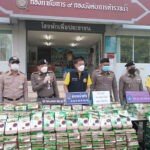 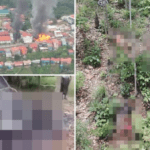 Myanmar military ‘massacring its own people