The Public Health Ministry’s Department of Health is this week hosting a workshop for 70 nutritionists and healthcare officials from all 10 Southeast Asian countries to exchange ideas for a “nutrition surveillance system”.

Dr Amporn Benjaponpitak, the department’s deputy director-general, said on Wednesday the participants would be visiting places where the promotion of nutrition had been successful, such as an iodine-salt factory in Ratchaburi and the “red-cheeked women by vitamins” project based in Chon Buri and Samut Prakan.

Wanlop outlined the objectives while opening the workshop on March 5. It continues through March 8 at a Bangkok hotel.

He cited a recent report that an increasing number of Thai children were overweight and too short for their ages.

It said 10.6 per cent of children under five were too short for their age group, which Wanlop called a concern despite the mean height in Thailand of 0.89 being somewhat taller than the global average of 0.77.

The Health Department would like to see at least 68 per cent of six- to 14-year-olds reach a healthy weight and height this year.

Its “First 1,000 days of life” scheme promotes children’s development and wellbeing from birth to their second birthday through better post-natal care, nutrition and proper parenting. 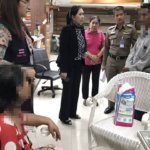 Homosexuality? No such thing in our country, says Tourism Minister