A SWIMMER was airlifted to hospital after being savaged by a shark at a popular US tourist beach – near where the movie ‘Jaws’ was set.The 61-year-old was left with deep puncture wounds to his torso and legs after the vicious attack in Truro, Cape Cod,  Massachusetts.

Longnook Beach has now been closed to swimmers and workers have put up warnings signs telling people to stay away.It was the first recorded shark attack at the popular summertime tourist destination since 2012. Those heading there have long been warned to swim at their own risk.Gary Sharpless, assistant harbourmaster, said the attack happened around 4pm on Wednesday on the Atlantic Ocean side of the peninsula.

Numerous shark sightings have been reported in the area this summer, including several involving great whites, the species immortalised in the 1975 hit movie.

However, there has been no confirmation that Wednesday’s attack involved a great white shark.

The area is a feeding ground for seals, which attract all kinds of sharks. Witnesses said at least 10 seals were seen in the area shortly before the attack.

The Atlantic White Shark Conservancy said shark encounters in which people are injured are as “terrifying as they are rare.”

While we still don’t know all of the details of this particular bite, sharks are not known to target people specifically and when they do bite people it’s usually a case of mistaken identity,” the group said in a statement.

“Sharks ‘test the waters’ with their teeth, much like we use our hands. It’s how they determine if what they encounter is prey or something to avoid.”

Truro was the site of the last shark attack on Cape Cod, in July 2012, when a Colorado man on Ballston Beach suffered a bite that required 47 stitches.

However, Massachusetts’ last shark attack fatality was more than 80 years ago in 1936.

Amity is the unofficial name of an Island otherwise known as Martha’s Vineyard which lies off the coast of Massachusetts.

It was the setting for three Jaws films in the franchise including ‘Jaws’, ‘Jaws 2’, and ‘Jaws 4’ (aka Jaws: The revenge). 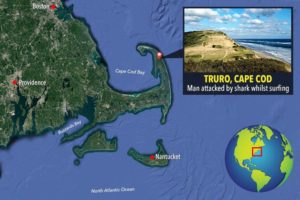