A Rayong man allegedly shot his ex-girlfriend dead in Nakhon Pathom after she rejected his offers to restore ties, before turning the gun on himself.

The man, who police said is about 25 years old, was severely injured and rushed to hospital following the shooting on the street at the entrance to the Sahaporn housing estate in Tambon Salaya of Nakhon Pathm’s Salaya district.

The victim was identified as Natchariya Thaprajit, 21, a Surin resident and student at Rajabhat Suan Sunantha University in Nakhon Pathom.

Police quoted her relatives as saying that the man shot her with a .38 revolver after she refused to reconcile with him after they had broken up. The man shot himself in the neck and was severely injured.
The Nation 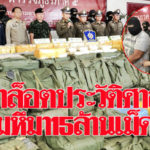