Home » Rates of syphilis and gonorrhoea are through the roof

The high rates of syphilis and gonorrhoea diagnoses in England have sparked concern. Both STIs have increased by more than 20% in the past year, and cases of syphilis are at their highest level for nearly 70 years, new figures show.

Public Health England, which published the figures, called for strengthened local and national services for the prevention and treatment of STIs. A total of 7,137 new diagnoses of syphilis were made in 2017, a jump of 20% on the previous year – the largest annual number of reported cases since 1949. Diagnoses were most common among 25 to 34-year-olds, who accounted for 33% of all cases, followed by 35 to 44-year-olds. Nearly 78% of diagnoses were in men who have sex with men.

While the overall number of new STI diagnoses in 2017 was broadly unchanged year on year, there was also a 22% increase in cases of gonorrhoea – a trend Public Health England described as ‘concerning’. In March 2018, the first case was detected in the UK of a strain of gonorrhoea highly resistant to the two types of antibiotics commonly used to treat the infection. The case was linked to travel to south-east Asia, but Public Health England has reminded GPs to refer all suspected cases of gonorrhoea to specialist sexual health services (SHS). Total SHS attendances across England increased 3% between 2016 and 2017, from 3.2 million to 3.3 million. Over the past five years, attendances have jumped 13%.

Councillor Izzi Seccombe, chairwoman of the Local Government Association’s Community Wellbeing Board, said the rise in attendances was placing a ‘significant strain’ on council resources. She said: ‘There is no time for complacency. ‘Unless greater recognition and funding is given to councils to invest in prevention services, a reversal in the encouraging and continuing fall in STIs is now a real risk. Health inequalities will remain and councils may be unable to respond effectively to unforeseen outbreaks.’ ‘Government must reverse cuts to councils’ public health grants because we cannot tackle this by stretching services even thinner,’ she added. Figures also showed a drop of 8% in the number of tests for chlamydia.

Public Health England noted that most of this decrease had taken place in sexual and reproductive health services, where chlamydia testing has fallen by 61% since 2015, a trend ‘likely reflecting a reduction in service provision’. It recommended that local authorities need to enable young women to be tested for chlamydia when they access contraceptive services, and stressed the importance of ‘statutory, high-quality’ relationship and sex education in secondary schools. 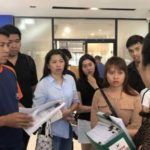