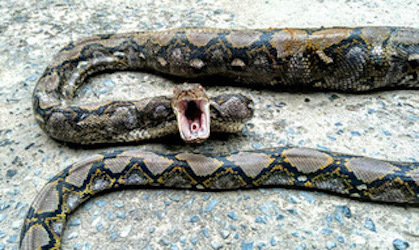 A 12-ft long python is caught hiding down the side of a house after swallowing a pet cat.

Rescuers arrived after the homeowner noticed his beloved moggy was missing and searched the yard before noticing the serpent coiled up under the concrete.

Nom Pitsanu, 50, feared the worst and his heart sank when the beast was pulled out into the open sporting a large bulge in its belly.

He accepted that the family’s beloved one-year-old male cat named ”meow” had been eaten alive by the merciless snake.

The python was carried away without being forced to regurgitate its dinner. Wildlife workers even treated cuts on the snake’s scales which were sustained when it was yanked out of its hiding place in Pathum Thani.

Devastated Nok said: ”I think that the snake came in during the night and grabbed the kitten. He was a beautiful little pet.

”We have fences and a gate around the home but there’s nothing we can do to keep out a python if they come here.” 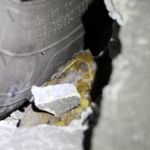 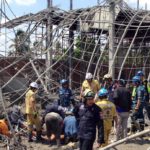