Home » This problem is mine – and all of ours

Thai soldiers in the Burapha Field Force’s Humanitarian Mine Action Unit 1 continue their marking of spots with landmines on Thursday in Sa Kaew’s Ta Phraya district as part of ongoing efforts to de-mine the area.

Although old conflicts, which led to these hidden killers being planted by insurgents and government forces from the 1970s until the 1990s, may be over, there are still at least one million landmines left buried in 48 districts of 18 border provinces, including Sa Kaew’s four districts, and pose risk to local residents.

In Ta Phraya’s Tambon Thap Thai, one village has 10 families whose members have been maimed for life after stepping on to landmines.

Somjit Neyeud, 72, whose right leg was blown off by a landmine planted during the time of the Khmer Rouge regime in 1977, says her life as an amputee has been difficult over the past 40 years.

She said she now lived on a government disability allowance of just Bt800 a month. Her neighbour Somsak Han-am, also 72, got his left leg blown off while going out to collect items from a forest many years ago. 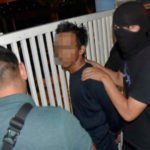