TWO AGENCIES have found no grounds to believe the current permanent secretary for Education or his predecessors have corruptly taken money from the Educational Fund for Life Development, Education Minister Dr Teerakiat Jareonsettasin said yesterday.

“Information from the Public Sector Anti-Corruption Commission [PACC] and the Education Ministry suggests that the top executives might have been just negligent,” he said.

Teerakiat was speaking after attending a meeting with relevant authorities, including the PACC and the Anti-Money Laundering Office (AMLO).

At the meeting, the participants also reviewed the report on the Education Ministry’s internal investigation into the alleged misuse of the fund.

Teerakiat said about Bt77 million of the fund had gone to undeserving recipients between 2005 and this year.

After the alleged corruption was exposed, Rojana Sintee – a C8-level official at the Education Ministry – confessed that she had embezzled the money and claimed she acted alone.

Following the confession, she was fired from service.

“The internal probe suggests Rojana and three other education officials had committed grave disciplinary offences over the handling of the fund,” he said.

According to him, one of them is even more senior than Rojana and had long worked closely with her.

“Two others have just got involved at some point,” Teerakiat said.

The education minister refused to identify the officials except Rojana. But he revealed all four of them have held the ranks of C8 or higher.

Teerakiat said the internal probe had already concluded and the next step for the Education Ministry was to take disciplinary action against implicated officials and former officials.

He said the AMLO would also take action against accomplices who did not work at the Education Ministry.

“Those accomplices will face charges of money laundering,” he said.

Peace TV to be unplugged for one month 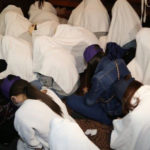