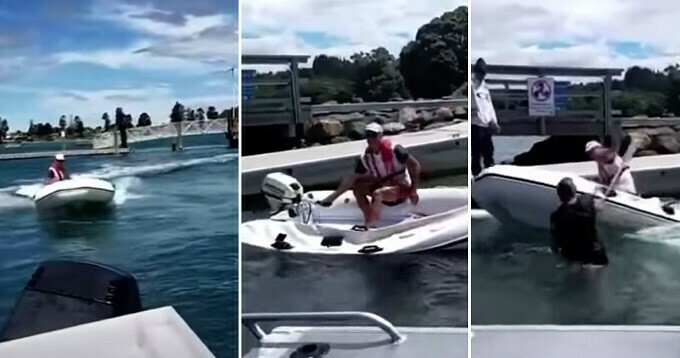 A day out on the water ended in a violent showdown between a man in an inflatable dinghy and a woman in a boat with children.

Video shared online shows a man in a white inflatable dinghy yelling at a woman and deputy school principal, accusing the people on board her boat of causing $1000 worth of damage to his vessel by exceeding the speed limit nears the docks.

The exact incident which led to the row is unclear, but footage shows the two yelling back and forth at one another, exchanging expletive-laden insults.

During the heated argument, the man speeds off sharply turning around and heads toward the boat narrowly missing it.

The woman on board the boat, identified as Catherine Browning by the New Zealand Herald, picks up a wooden oar before the man narrowly misses the boat and appears to head off.

Moments later the furious man circles back again and at full speed heads straight for the boat, colliding with it and damaging his own vessel.

“There are children on board!” another woman tells him as young children can be heard crying in the background.

“I don’t care!” the man yells as he attempts to start his engine. The side of his inflatable boat meanwhile has been damaged by the collision and starts to deflate.

Moments later Ms Browning can then be seen in the waist deep water swinging an oar toward the man who is now struggling to restart his boat.

The video ends with woman filming trying to console the crying children while the man continues yelling as he attempts stop his dinghy from sinking.

The incident reportedly occurred on January 23 at the Tairua boat ramp in Coromandel, a town in New Zealand’s North Island.

Ms Browning spoke to the New Zealand Herald claiming she had no choice but to defend herself.

“He came in at full speed attacking us, ramming us… he scared the s*** out of me and I had to defend myself,” she said.

Ms Browning insists there was more that happened before the filming began and told the NZ Herald she couldn’t believe how fast the situation escalated.

Ms Browning, a deputy principal at Tairua School, has also been called to the Board of Trustees to explain her behaviour after she was identified in the video that went viral. 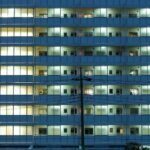 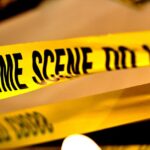