The Duke of Edinburgh has been involved in a car crash while driving near the Queen’s Sandringham estate, Buckingham Palace has said.

Prince Philip, 97, was not injured in the accident, which happened as he drove a Range Rover out of a driveway onto the A149 shortly before 15:00 GMT.

Buckingham Palace said the crash involved another car. Two people in the car were treated for minor injuries.

According to eyewitnesses, the car that the duke was in overturned.

The eyewitnesses said they helped the duke out of the vehicle. He was conscious but very, very shocked and shaken, they added.

The duke is back at Sandringham and has seen a doctor as a precaution.

A witness who drove past the scene at around 15:40 said she saw an ambulance and “a heavy police presence”.

“Luckily it was just sort of on the side of the road, the road wasn’t closed in any way.

“Obviously it looked quite smashed in. I’m quite amazed he [the duke] is okay actually.”

The Queen and Prince Philip have been staying at the estate in Norfolk since Christmas.

The Archbishop of York, John Sentamu, tweeted a prayer in support to the duke. 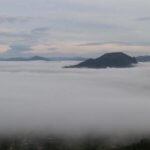