ELECTION RACE: An opposition politician on Monday sought to bar junta chairman Prayuth Chan-ocha from running in the March 24 election.

In what appears to be a tit for tat legal maneuver, Thai Raksa Chart Party member Ruangkrai Leekijwattana filed a complaint to the Election Commission, arguing that Gen. Prayuth should be disqualified for breaching a constitutional clause.

Section 98 of the Thai constitution bans media agency owners from running for office. Ruangkrai’s petition said Prayuth is ineligible because as a prime minister he has a number of state media at his command.

Ruangkrai’s complaint was filed the same day the Election Commission was reportedly meeting to discuss whether his party should be disbanded for violating election laws.

The party is in hot water for nominating Princess Ubolratana Mahidol as its prime minister candidate Friday, only for His Majesty the King to block the move, saying that royal family members cannot seek office. 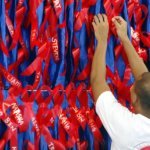