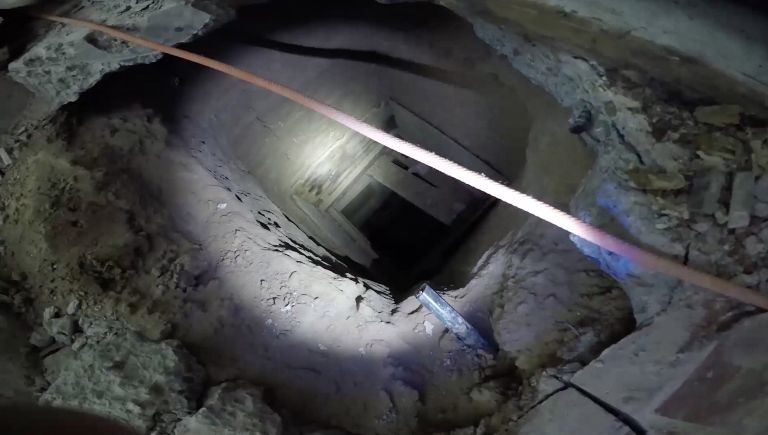 Drug Tunnel: Lots of strange things have been found in fast food restaurants – usually in the meal you’ve ordered – but no one expected to find a sophisticated drug-smuggling tunnel underneath this American KFC.

The tunnel, which starts in an abandoned KFC restaurant in Arizona, leads to a house in Mexico.

Back in April the investigations division of the Department of Homeland Security revealed it got wind of a tunnel underneath the fast-food outlet in San Luis – which is about 200 yards north of the Mexican border.

Police got on the trail of the owner of the building, Ivan Lopez, and ended up arresting him after finding several suspicious packages in the back of his truck. The parcels turned out to contain methamphetamine, cocaine, heroin and fentanyl.

His arrest also led to a search at his home and the old restaurant – which is where things got really interesting for the investigating team.

At the abandoned restaurant, agents found a hidden tunnel large enough for people to freely walk through, taking people under the Mexican/American border.

The special agent in charge of the case, Scott Brown, told the Associated Press that tunneling is an indication that increased infrastructure, resources, and patrols on the border are forcing drug smugglers ‘to go to more costly routes into the US’.

A tunnel can take a long time and cost drug cartels hundreds of thousands of dollars to build.

Mr Brown said: “It [tunnelling] has definitely increased since the border security measures have ramped up.”

Although Lopez only bought the building in April, it’s still unknown to authorities how long the tunnel has actually been in use.

The government believes Lopez is a well-connected cartel member.

Lopez was spotted taking packages out of the building several times before his arrest earlier this month, it was reported by the court papers.

He is currently being held in federal detention without bail because he is considered a flight risk.

This isn’t an isolated incident – over 200 tunnels running under the American and Mexican border have been discovered in the last 28 years.

Back in 2016 authorities discovered a tunnel running between OtauMesa, in California, and Tijuana, Mexico, that was nearly half-mile long.