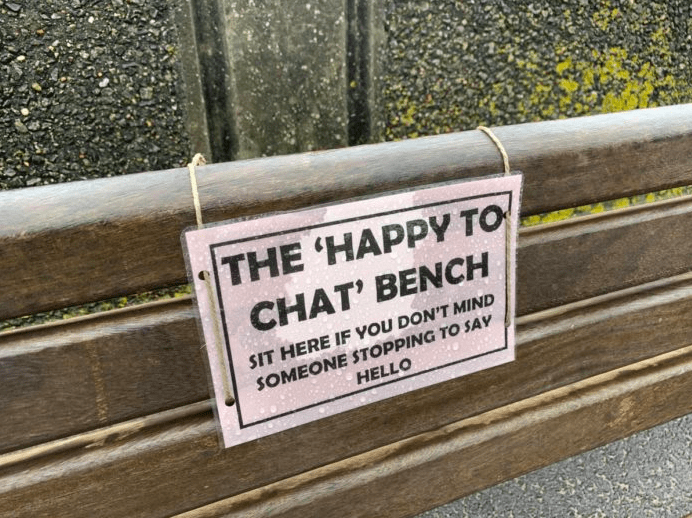 Police in an English seaside town have installed “chat benches” in a bid to combat loneliness in the community. Anyone who is feeling isolated or disconnected is encouraged to sit on the benches and strike up a conversation with a friendly stranger.

“The Chat Bench is a very simple concept where a sign is placed on a bench, typically in a park or a town center, in a location used by a good cross-section of the community,” said Burnham-On-Sea Police Community Support Officer (PCSO) Tracey Grobbeler to Burham-On-Sea.com.

So far, two chat benches have been unveiled — one on the waterfront in the town of Burnham and another next to a cafe in nearby Taunton. Each bench bears a welcoming sign for potential visitors: “The ‘Happy to Chat’ Bench: Sit Here If You Don’t Mind Someone Stopping To Say Hello.”

“The sign simply helps to break down the invisible, social barriers that exist between strangers who find themselves sharing a commonplace,” said Grobbeler.

“Simply stopping to say ‘hello’ to someone at the Chat Bench could make a huge difference to the vulnerable people in our communities and help to make life a little better for them.”

A Burnham-on-Sea Coastguard spokesperson said they are in full support of the mission, having witnessed firsthand the toll that loneliness, abuse, and mental illness can take on a person’s wellbeing.

“In our role as Coastguards, we deal with many people who are battling mental health issues, they can feel isolated and unable to share what is going on, often this can be alleviated just by a simple chat,” the spokesperson said.

“A simple ‘Hello’ or ‘Are you OK?’ can make such a difference to a person.”

The spokesperson pointed out that having someone to talk to is a “luxury” for some people — many are suffering in silence without anyone to even ask how their day was. The kindness of strangers can make a world of difference.

“We do all have the ability to help, just by passing the time and lending an ear, no matter who you are, race, gender, sexual orientation, we are all the same and we all have our problems,” the spokesperson said.

“So next time you are sat on a bench could be any bench in the world, just throw out a friendly hello, who knows you may just change someone’s life.”

The Burnham-On-Sea Police Department introduced the chat benches to coincide with World Elder Abuse Awareness Day, which encourages community members to appreciate and engage with the senior population — and to raise awareness of the physical, emotional and financial abuse many older people endure.

“Any form of abuse is completely unacceptable and it fills me with sadness to think that this cruelty happens to members of our elderly community,” said Police and Crime Commissioner Sue Mountstevens.

“The Chat Bench is a fantastic new initiative that I hope encourages those of all ages to start many more conversations in the future. If you think an elderly friend, neighbor or relative is vulnerable or at risk of loneliness.”