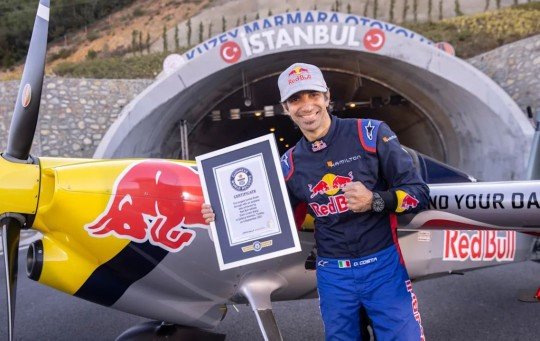 A daredevil has become the first person to fly a plane through a road tunnel – twice.

Dario Costa set a new Guinness World Record when he piloted a small aircraft through a set of narrow tunnels in Turkey.

He clocked up speeds of more than 150mph while blasting through the tunnel, securing his place in aviation history.

Not content with smashing one record, the 41-year-old aviator chose a tunnel split into two sections.

His double feat at the Çatalca Tunnels on Turkey’s Northern Marmara Highway won him the Italian pilot Red Bull’s prestigious Air Race Challenger Class, becoming the first Italian to do so.

Mr Costa revealed he had been dreaming up the stunt for several years before finally attempting it.

He said:  ‘I’d never flown in a tunnel in my life – nobody had ever done it – so there was a big question mark in my head whether everything would go as we expected.

‘It was a big relief, of course, but big, big happiness was the main emotion. For me, it’s another dream come true.’

Mr Costa had to keep the plane hovering just above the road to make sure he didn’t clip the concrete walls and crash to an almost certain death.

When inside the tunnel, there was only about four meters between the tip of each wing and the concrete walls.

The most dangerous part came when he briefly emerged into the open air gap between the tunnels and his aircraft was battered by crosswinds.

He had to work within millimeter sized margins to keep the powerful aircraft steady, requiring reaction times of less than 250 milliseconds.

The stunt set at least five records, with the pilot also becoming the first to take off inside a tunnel and the longest and fastest flights in a tunnel.

He said: ‘Everything seemed to be happening so fast, but when I got out of the first tunnel, the plane started to move to the right because of the crosswinds and in my head, everything slowed down in that moment.

‘I reacted and just focused on getting the plane back on the right path to enter the other tunnel. Then in my mind, everything sped up all over again.’

A team of 40 support staff were involved in the flight, which covered 2.26km in less than 44 seconds. 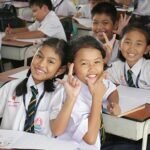 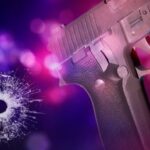 Shot dead in their home