The Taoist “Nine Emperor Gods” event held on the holiday island of Phuket, began October 9 and coincides with observances of Chinese communities across the region who refrain from meat and other indulgences such as drinking and gambling. 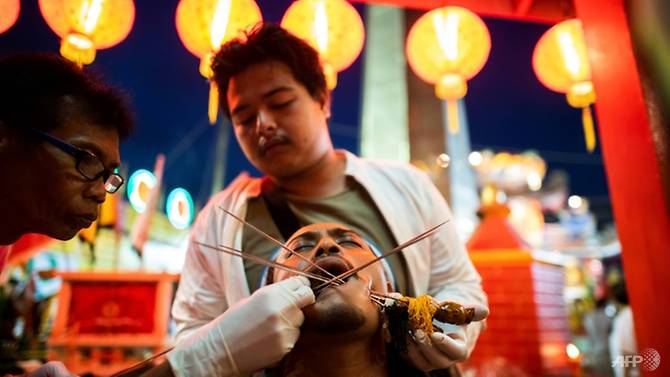 Participants on the island – which has a sizeable Chinese population – go above and beyond, piercing cheeks and tongues with an assortment of blades, spikes, skewers and other, more exotic items – including petrol pumps.

The festival, did not take place last year because of a lengthy mourning period following the death of the Thai king in October 2016. 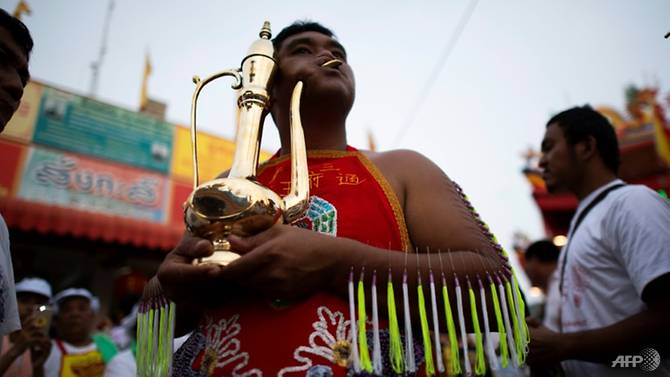 One man stuck two wrenches through his right cheek, while another shook his head side to side and cut his tongue with an axe blade, blood dripping down his chest.

A fishing rod, anchor and part of a palm leaf were also put to use, as festival-goers marched in processions with the items poking out of their mouths.

“The pierced men are the deities who descend down to Earth to show their miracles, and the piercing means that the deities suffer so that people’s sins are cleansed,” said Pathompong Reanthong, 24, one of the organisers.

“The key to this festival is for the people to observe the religious precepts, and rid themselves of meat consumption. It’s actually a festival to ward off bad luck,” he added.

Many work themselves into a trance before piercing, which is said to numb the pain. 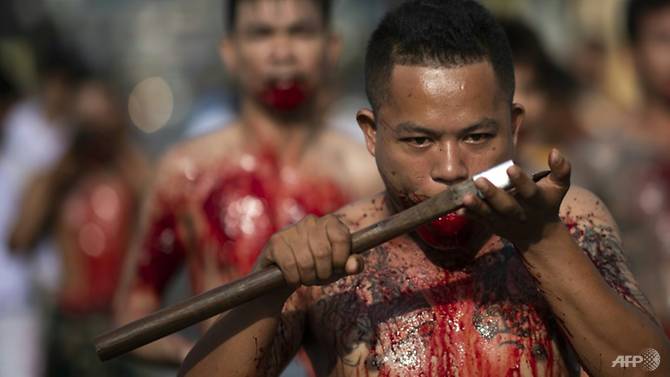 Participants are expected not to eat meat during the festival.

The celebration dates back to 1825, according to local folklore, when a visiting Chinese opera troupe fell ill.

They are believed to have adopted a vegetarian diet and carried out Taoist rituals in an effort to improve their health.

Walking across hot coals is also incorporated into the final stages of the event, which is expected to draw hundreds of thousands of people.