Images released this morning show blood smeared on the walls inches away from the entrance of the property, which has been cordoned off after the 11-month-old boy and a woman in her 30s were knifed.

The house is on the Oriel Estate in Hanworth, Feltham, west London, which was on lockdown after the horror incident last night.

The baby remains in a critical condition, but the woman is understood to be stable with non life-threatening injuries.

Both were rushed to west London hospital by air ambulance for treatment.

Cops are now hunting for a man known to live at the address, who is believed to know the victims.

Cops and paramedics were called to the scene in Swinfield Close at 7.12pm, followng a report concerning residents’ safety.
A witness told Sky News: “I heard a lot of screaming and crying, it was quite distressing to hear.”
Residents reported seeing more than 20 police cars, London’s Air Ambulance and a police helicopter near Hounslow Road.

A Metropolitan Police spokesman said: “At the scene a woman and an infant had suffered stab wounds.

“Both victims were taken to a west London hospital where their conditions are serious but stable at this time.

“We await further updates. A crime scene has been established and officers remain at the scene.” 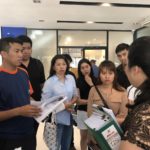