A man was found drowned in a 500-litre concrete container at his house in Phichit’s Muang district on Wednesday.

The bloated body of Sitthirak Chakjoong, 39, was found in the Klong Tha Luang house.

A doctor determined that Sitthirak died about four days ago.

His aunt, Thurian Jaemkrajang, told police that Sitthirak disappeared four days ago until relatives noticed the stench coming from the container.

His relatives told police he was addicted to solvents and he liked to relax in the cool jar.

Rescuers had to break the container to retrieve the body. 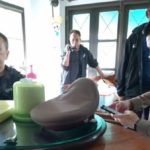