A man was kicked to death by a domestic elephant while he was delivering food to a group of elephants at a tourism business in Phang Nga’s Muang district.

Police said Thaworn Sawaengkij, 59, was killed by a 40-year-old female elephant while he was delivering pineapple plants to feed a group of elephants in Tambon Song Praek on Wednesday night.

His son, Anurat Sawaengkij, 35, said he learned from local villagers that the elephant broke off its chain and kicked Thaworn repeatedly for about 30 metres. He was unloading pineapple plants from his pickup.

Anurat said he was food to another group of elephants at another location.

He said when he arrived at the scene, his father was barely breathing. He rushed him to the Phang Nga hospital but he was dead on arrival.

The elephant was later recaptured by its handler and taken away from the community for fear that it would attack other villagers. 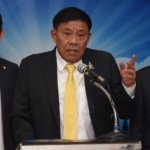