Some Brits have been accused of pretending to be disabled in order to get through mammoth airport queues faster, according to reports.

Birmingham Airport has reportedly seen a 20% rise in the number of people asking for disabled assistance – with more wheelchairs ordered and extra staff taken on.

Passengers who are disabled have a right to assistance getting through airports and can pay a fee to use fast track lanes.

But many disabled people have spoken out in the past about being treated poorly at airports, with some left stranded and their wheelchairs lost or damaged.

Others say they often face discriminatory allegations that they are faking their disabilities.

Concerns were apparently raised at a meeting of industry leaders on Wednesday, attended by transport secretary Grant Shapps.

An insider at the gathering told MailOnline: ‘If people are pretending it’s potentially stopping genuinely disabled people from getting a place, and that’s pretty grim.’

But the source added: ‘You can’t just say to people “no, you’re lying”.’

Another industry boss added: ‘There should be a special place reserved in hell for people who pretend to be disabled.’

It comes as hundreds of flights are delayed or cancelled as airports try to cope with an influx of half-term holidaymakers and dramatic staff shortages.

Travellers have been advised to travel with only a small bag or a rucksack to avoid chaos.

Meanwhile, Ryanair boss Michael O’Leary has suggested the British Army be drafted in for the next ‘three to four months’ to help resolve the disruption.

Rory Boland, editor of Which? Travel, called for a regulator with ‘real teeth’ so ‘proper’ punishments can be dealt out

Mr Boland said: ‘The shameful scenes at UK airports this half-term are the result of an industry in which some airlines feel they can get away with ignoring consumer rights and acting with near impunity.

‘It is clear that passenger rights need to be strengthened … and the Civil Aviation Authority must be given the power to issue direct fines so it can hold airlines to account when they flout the law.’

Disability charity Scope, Birmingham Airport and The Department for Transport have been contacted for comment. 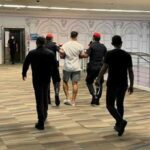