A pensioner dubbed ‘’the man with two heads’’ by his neighbours can finally sleep easy – after having the giant tumour removed.

Jaroon Suanmali, 71, suffered years of agony after the growth ballooned and he could not afford to see doctors.

He continued working as a rubbish collector in Lopburi, Thailand. Jaroon struggled to sleep and had lost hearing from where the tumour had taken over and covered his right ear.

But he was finally saved after a passer-by spotted him and shared the story online – raising thousands in donations from Thais after it appeared in the national media earlier this month.

Jaroon has now had life-saving surgery to remove the 15cm long, 2kg tumour at the King Narai Hospital in Lopburi.

Speaking after the operation, Jaroon said he was ”eternally grateful” to the doctors and everybody who had given money for him to be treated.

He said: ‘’I have a feeling that’s amazing, it’s like nothing I could have imagined.

‘’My neighbours weren’t sure I would survive. I didn’t even know if I could wake up after the operation. Now I have a new life. I am a new person again.”

Jaroon first noticed the growth more than ten years ago but local doctors told him that it would subside.

It continued growing and he was cruelly dubbed ‘’the man with two heads’’ by residents near his ramshackle home in the Chubsorn district of the province.

Doctors performed an MRI scan and finally diagnosed a brain tumour after an online appeal earlier this month.

Surgeons found that the growth was not extending inside the skull. They successfully operated on November 13 and removed the tumour and all the affected tissue. The pensioner can even hear again.

Tests are now being conducted on the tumour to create a plan for Jaroon’s future treatment.

Dr Worawat Kaewwichian, who performed the surgery, said: ‘’Tests are being carried out on the tumour and the patient is still hospitalised. He can return home next week. This was big surgery. But we’re glad to know that the doctors here can treat this disease.’’ 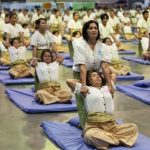