A drunk Pattaya woman upset over being insulted by her foreign boyfriend tried to commit suicide by jumping from a second-story hotel room.

Chaima Wandee, 30, was pulled to safety by police after climbing out onto the second-floor awning at the PN Mansion in South Pattaya Oct. 18.

PN staffers said Chaima had rented the room that morning while really drunk. She told police she wanted to kill herself because her foreign boyfriend offended her, but did not say how. 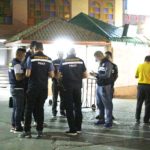