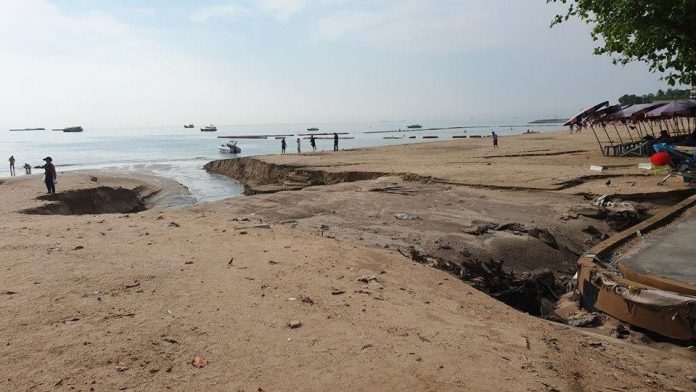 Mayor, Chief of Department of Natural Resources, announce measures to prevent future damage to the beach during heavy rains

Officials visited Pattaya beach yesterday and this morning to survey the damage caused by rains to the brand new 400 million baht sands.

The Chief of the Department of Natural Resources and Environment Jatuporn Burutphat was in conference with the deputy mayor and the harbor department at the scene.

Pictures on Facebook showed backhoes at work and fresh sand now in place.  The equipment was old dredging sand that had been washed into the sea during the storms. The total week to restore the beach would take about a week, officials stated.

However, the fact was this is just a stop gap measure and cosmetics. Officials admitted this in a rare statement taking some responsibility for the debacle.

Jatuporn said the situation was very concerning and the pictures on social media looked simply awful.

He spoke of the potential for damage to tourism. Just the week before the city was touting the beach and the positive reviews it had been getting from tourists and locals. However, critics on social media including those on the comments section of our own news website have been warning for months that without fixing the drainage issues and flooding issues that have been happening for years that the hard work and 400 million baht spent on the beach would literally be washed away.

He discussed what to do with the Harbor Department and City Hall outlining a number of measures that included the placing of large bags of sand on the sidewalk and on the beach to prevent further erosion in up to a dozen areas. Citizens on social media, however, stated concern that if they barricaded the beach and there was further flooding and rains this would cause a buildup of water on Beach Road.

The first main thing to do, he said, was to sort out drainage problems in the city and on beach road so that flood water flows where it is meant to go – and not all over the beach sand.

These initial measures must be done first before a budget of 105 million is sought over the next 1 to 2 years to improve drainage in the wider area of Pattaya.

Mark KellyJuly 12, 2020
A majority of people are still opposed to opening the country to foreigners who are...
END_OF_DOCUMENT_TOKEN_TO_BE_REPLACED