Police said four insurgents on two motorcycles hurled three grenades over the fence of a house in Ban Chamao village in Tambon Naket at 7.40pm.

Two of the bombs exploded and the house owner, Phon Chantan, and a relative, Saksi Srinuan, were injured. They were rushed to the Khok Pho Hospital. 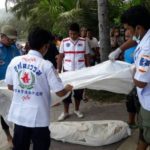