A Philippines train system management is under fire after passengers were filmed using umbrella inside the train to protect themselves from water dripping and it wasn’t even raining outisde.

In the video, passengers of Metro Rail Transit Line 3 (MRT-3) at the coach alotted for women, children, and persons with disability (PWD) can be seen protecting themselves with umbrellas from the leak that was coming from the ceiling.

The incident happened on August 7 around 4 p.m. to 5 p.m. in Mandaluyong City.

“It was raining hard outside when I took the train. But it was no longer raining outside when the water started dripping from the train ceiling. It felt like we’re on an amusement park ride,” said Giselle Tolosa, the person who captured the video.

The PWD coach was the only area that had experienced the leaks because of the broken air conditioners on its roof.

The management of the MRT-3 on Wednesday apologized for the water that leaked from one of its train’s air-conditioning units.

The MRT said its trains’ 10-year-old air-conditioners were supposed to be replaced a couple of years ago before its contract with the previous maintenance provider was terminated.

“As of Nov. 2017, when the DOTr terminated MRT-3’s previous maintenance provider, only 3 out of MRT-3’s 72 train cars have been overhauled,” it added

The MRT management said they have already procured brand new air-conditioning units that are scheduled to arrive within the month. 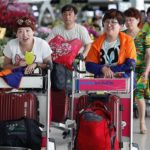 Crocodile caught inside pensioner’s home… and it chases away the police!