A pardoned ex-con is behind bars again after being arrested for two armed robberies in Nong Plalai.

Aun Veerayuth, 33, was captured in front of his house Nov. 13. He wasn’t hard to find as he lives across the street from the Banglamung Police Station.

Police allege Veerayuth held up a motorcyclist Nov. 7 on Soi Playfan in Nong Plalai and stole a two-satang gold chain before fleeing. The next day he’s accused of again threatening a motorcyclist at gunpoint on Nong Ketnoi Road and this time robbing the victim of 700 baht.

Both crimes were captured on CCTV. The suspect confessed, saying he sold the gold and used the money to buy drugs on Loy Krathong.

Authorities said Veerayuth previously was imprisoned for robbery, but was released on a royal pardon a year ago. 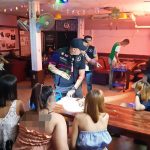 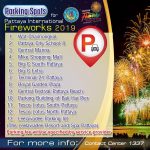 Mark KellyFebruary 23, 2020
South Korea is raising its alert on the new coronavirus to the “highest level,” President...
END_OF_DOCUMENT_TOKEN_TO_BE_REPLACED