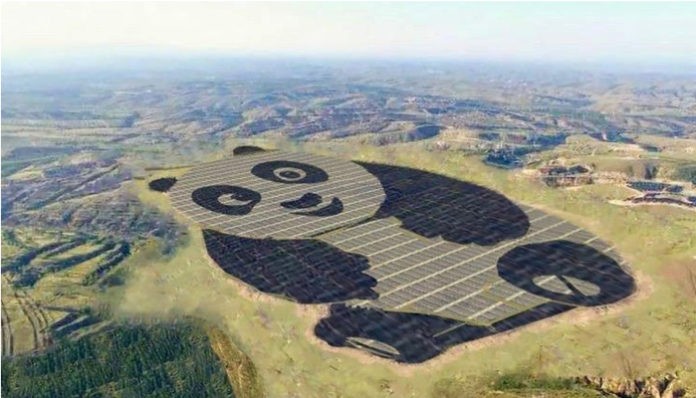 Because caring for the planet does not have to be boring.

The Chinese authorities have focused in recent years on energy: to be one of the most polluting countries on the planet, with hundreds of coal power plants scattered throughout the country, to lead the green revolution.

It is no secret that China has used the panda as a way to extend its geopolitical and economic interests throughout the world. Panda diplomacy is articulated in various ways: from the loan of bears to zoos from all over the globe to solar power plants drawn in the shape of a panda.

This solar power plant is located in Datong, west of Beijing. Although the image above is a montage, which led some media to doubt the veracity of the information, the project is real. In Snopes they have achieved an aerial photograph that, although much less spectacular, shows how the solar plant does have a panda shape.

According to local authorities, the design of the plant aims to interest the smallest in the energies of the future and how we can generate electricity without loading the planet in the meantime. The complex has an installed power of 50MW, quite discreet.

As expected, the sketch made by one of the designers hired by the company and the final result differ a lot. Much of the responsibility falls on the delicate photovoltaic panels used in all the plants of the world: they must be dark to better capture the sunlight, which limits their artistic capacity.

China already accounts for 25% of the world’s electricity production via photovoltaic panels, and doubled its installed capacity between 2015 and 2016. They also have the two largest plants.

This millionaire man spends his free time picking up trash